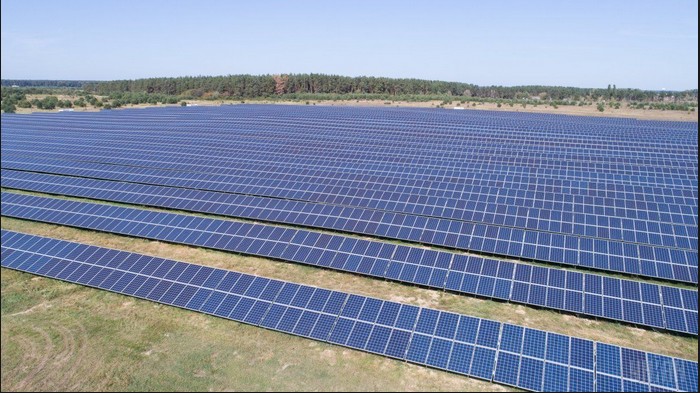 For the conversion of sunlight into direct current electricity, upon the project are installed solar modules Poly crystalline with a total of 19,215 pieces, Talesun (China) type TP660P – 255 W. manufactured with technology using polycrystalline silicon. The project also envisages the use of 79 inverter units that convert DC electric power generating solar modules into a three-phase alternating current of sinusoidal form. The projected system provides inverters of Sungrow, SG60KTL, with a rated output of 60 kW. The operation of the inverter is controlled by microprocessors, which provide an output current of a sinusoidal form with a coefficient of nonlinear distortion of less than 3%. Upon this project is provided a decentralized scheme for converting a DC to a three-phase AC. All solar modules are divided into parallel groups of 240 modules connected in- series. This configuration ensures the optimally coordinated operation of the solar modules with the inverter. Inverters are located next to the rows of solar modules on independent foundations. The connection between inverters and 0.4 / 10 kV transformer substations is carried out by a cable laid in a trench, in the ground.

Cables used for the PPS were selected based on the results of electrical calculations and laying conditions. The use of power cables with aluminum conductors of 0,4 kV NAYY-O 4 * (1 * 240) and copper veins from string-inverters to АССВ: ВВГ5нг-5 * 25 is supposed.

The project also provides for the power supply system for the needs of the SPP, namely the connection of the input automaton SPP (cabinet of own needs) from RU – 0,4 kV of the projected transformer substation of own needs 10 / 0,4 kV – the main input, and also the reserve input from the terminals of the input automatic switchgear RU-0,4 kV in the complete transformer substations.

The monitoring system is based on Sungrow equipment. Remote monitoring of operating modes and the status of solar power plant elements is carried out using the above-mentioned devices, to which are connected all solar station inverters.

Thus, all the information coming from the inverters is sent to the Internet via a wired or wireless channel, where it is stored on the respective servers.

The work of the station is carried out automatically and does not require a permanent stay of the operator.

If any device or SPP element is damaged or broken, it is possible to watch online from anywhere where there is access to the Internet.

The automated workplace of the operator is organized both in the control room and remotely via wireless communication (GSM, Internet).

The grounding system is made in accordance with the current standards, with the use of steel zinc-coated strips with cross-section 40 * 4mm.

Connection of the metal part of the structure to the earthing loop is made of steel galvanized wire with a cross section of 8 mm.

On the territory of the SPP are installed 5 complete transformer substations per 1000 kVA 10 / 0.4 kV. Production of JSC “Ukrelectroapparat”, Khmelnytskyi.

In the table all details about income and costs: