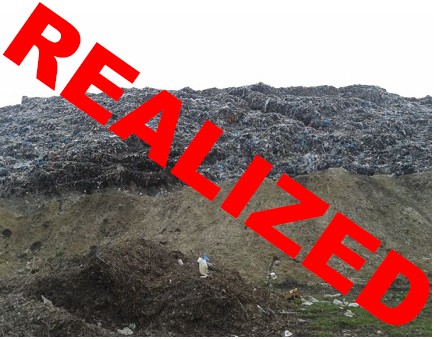 The purpose of the project
The purpose is to utilize landfill gas at MSW landfill and establish additional capacities of electricity generation, followed by sales in the Wholesale market of electricity according to the “green” tariff.
Brief project description:
Khmelnytskyi municipal solid waste (MSW) landfill, located 2 km from the city, was put into operation in 1956. Currently, more than 4.5 million tons of MSW are stored at the landfill.
MSW landfill consists of several parts:
– access road which ensures transportation of MSW to the landfill and empty garbage trucks driving back;
– management zone intended to ensure operation of the landfill;
– MSW storage area, where waste are placed and disposed;
– transformer point for power supply from external electricity grids.
The size of the landfill body slopes at the ground: south – 510 m; north – 265 m; east – 400 m, west – 380 m.
The landfill is overloaded and requires urgent reorganization and remediation; it is a powerful source of landfill gas (LFG) formation. LFG of the MSW landfill do to the atmosphere, causing a significant greenhouse effect and negative impact on the environment and human health.
Steady population growth in the city of Khmelnytskyi and high specific indicators of MSW formation require drastic measures in the field of MSW management, especially their disposal at the landfill. Getting rid of most of the problems associated with the operation of the city landfill can become possible thanks to the implementation of the project on collection and utilization of LFG through the use of LFG as fuels to produce electricity and heat, and of carbon dioxide, which enhances the environmental effects of the project.
The experience of LFG utilization in energy institutions of Ukraine indicates the economic and environmental efficiency of this kind of projects. The calculations taking into account the lifetime of the landfill, MSW disposal volumes, landfill capacity, content of the MSW disposed, food and other organic waste, show that the use of even a fraction of the landfill for the MSW collection and disposal enables the establishment of a biomass power plant with a capacity of 1 MW. Connection to the electricity network and the sale of electricity received using biomass according to the “green tariff” makes this project economically attractive.
At the MSW landfill it is possible to guarantee the implementation of the project on construction of a Biomass Power Plant with a total installed capacity from 1,000 kW (performance in 2016) to 1,400 kW (performance in 2020). The modular design of generating blocks enables to increase the produced capacity in proportion to the power of individual units. In the future, depending on the depletion of the biogas flow from the MSW landfill, some of the generation modules can be dismantled and installed in other landfills.
Basic technical indicators:
As calculated, the amount of biomethane, produced at Khmelnytskyi landfill is about 600 m3/h.
Due to the constant delivery of new garbage its total amount is constantly increasing together with gassing. After closing and remediation of the MSW landfill the organic part of MSW continues to decompose, producing biogas. The basic source data used for calculation:
• Beginning MSW delivery – 1956
• Delivered in 2015 – 171.0thousand tons of MSW
• Accumulated amount of MSW (as of 2015) – 4.42 million tons of MSW
• Average depth of the landfill – 30 m
• Expected closure and remediation of the landfill – 2020
Biogas power plant with a capacity of 1 MW can generate electricity amounting to 8000 MW*hour/year.
Status of the project implementation:
Land and preliminary feasibility study (concept) of the project “Collection and utilization of landfill gas from the landfill in Khmelnytskyi” are available.
The tender documentation for the project “Utilization of landfill gas in the MSW landfill and establishment of an additional capacity to generate electricity” is under development.
Within the USAID project «Municipal Energy Reform in Ukraine” the project concept has been prepared and the negotiations are conducted with potential investors for their participation in the competition for this project.
Key economic indicators:
The forms of cooperation with investors:
Public-private partnership 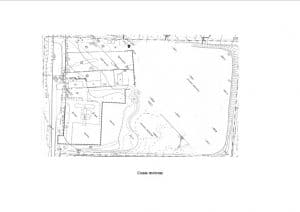 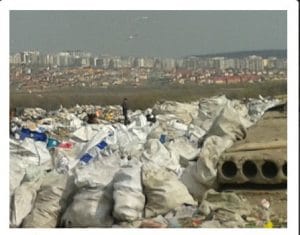 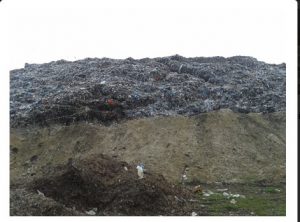